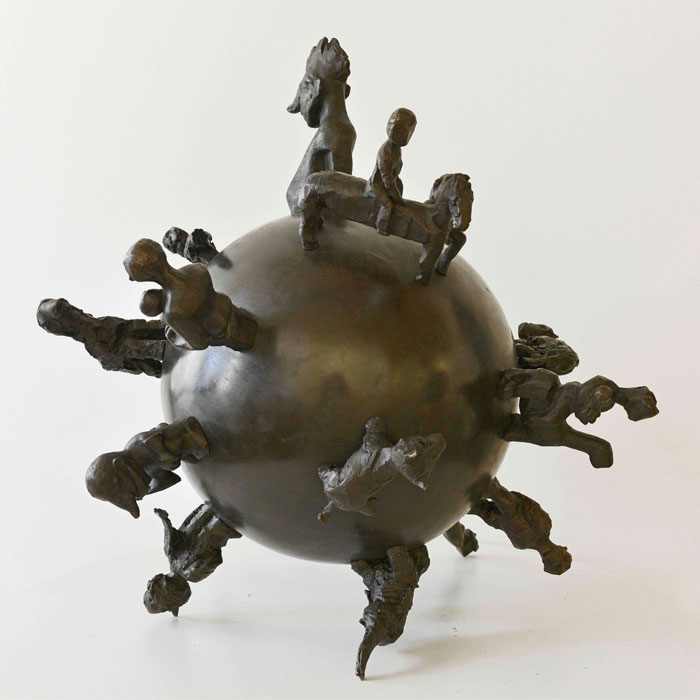 The Syrian-born artist Fadi Yazigi will be showing a selection of his latest works at the 2016 Beirut Art Fair this week.

A multi-media, figurative artist known for his paintings, ceramic relief carvings and sculptures, Yazigi was born in 1966 and studied at the Faculty of Fine Arts, Damascus University. He still lives and works in the city today.

In his instantly-recognisable pieces, Yazigi often presents his subjects as underdeveloped creatures or half-human beasts, capturing their emotions and expressions as they deal with whatever life throws at them, from the mundane and humorous to the horrors of war.

Selected pieces by the artist on show at the Beirut Art Fair include a bronze, globe-shaped sculpture, titled The Ball (2015). The work evokes the earth, its inhabitants and the life cycle, while simultaneously depicting an unexploded mine from World War II and the imminent threat it represents.
Commenting on the work, Yazigi said, “The creatures around it are us, with our dreams, tragedies and destinies, and the glimmer of hope we have for some light and love.”

A second piece on display at the fair is a bronze sculpture of a giant see-saw, unbalanced and occupied by 101 of the artist’s signature figures, all of whom are facing the same direction. The group appears poised for action, but exactly what is open to question; a planned escape, perhaps, or an adventure. Or could it be a plunge downhill to inescapable death?